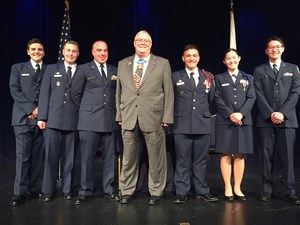 Retired Army Lt. Col. Charles Hagemeister, one of only 76 living Medal of Honor recipients in the United States, spoke to students Thursday at Valencia High School.
Nearly 600 students in two different sessions filled the school’s auditorium to listen to Lt. Col Hagemeister first answer questions from Golden Valley teacher Courtney Straka about his experiences during the Vietnam War and how he came to earn the Medal of Honor. Then the floor was opened to student questions.

On March 20, 1967, then Specialist Four Hagemeister, “Risked his life to render medical aid to several injured soldiers and protected them until they could be evacuated.”

Only 258 Medals of Honor were awarded during the Vietnam War, with 162 of those posthumously. Lt. Col. Hagemeister now travels the country speaking to students on behalf of the Character Development Program of the Congressional Medal of Honor Foundation.
Published February 13, 2017 Print