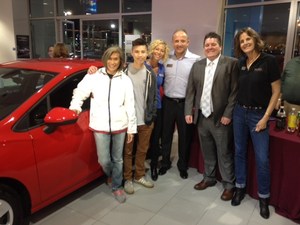 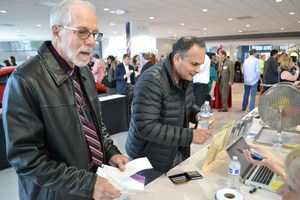 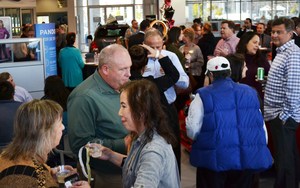 SANTA CLARITA, Calif – Castaic resident Amy Juico had the lucky ticket Wednesday night that won her a brand new 2017 Chevy Cruze LT from AutoNation Chevrolet Valencia.
The raffle was part of the 2nd Annual “WiSH Upon A Car” fundraiser for the WiSH Education Foundation, which funds programs and initiatives that go beyond what tax dollars provide for the William S. Hart Union High School District. The 2017 Chevy Cruze was donated to WiSH by AutoNation.

The ticket-pull event was held at AutoNation Chevrolet Valencia in conjunction with the SCV Chamber of Commerce monthly mixer. Over 100 people, most of whom held tickets for the car raffle, held their breaths as Mark LeCompte, General Manager of AutoNation Chevrolet Valencia, pulled the winning ticket and handed it to Amy Daniels, Executive Director of the WiSH Education Foundation. Unfortunately, Mrs. Juico was not in attendance (winners were not required to be at the event).

However, Mrs. Juico, a mother of four who sent all of her children through the Hart School District, got the message she had won and within 30 minutes was at the store to accept her prize. The 2017 Chevy Cruze LT is valued at over $20,000.
Published March 23, 2017 Print