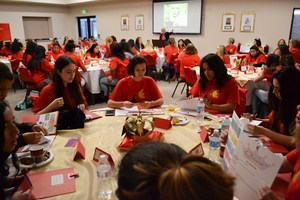 SANTA CLARITA, Calif – With the theme “Inside Every Woman is a Queen,” Sequoia School presented the biannual Young Women’s Conference at the Child and Family Center. The event was dedicated to student empowerment through emphasis on developing short-term and long-term personal and academic goals, and fostering post-secondary skills.
This year the event was expanded to include student ambassadors from across the Hart School District. Students from West Ranch, Valencia and Bowman also attended, with lunch provided by the District’s Culinary Arts program under the direction of chef Michael McClintock.

“This event was an extraordinary representation of students, staff, and community members coming together to support and grow leadership skills, resilience, camaraderie, and self-awareness among our future leaders,” said Brandi Davis, Principal at Sequoia School. “The young women who attended the day left uplifted and strengthened. They renewed current relationships, made new friendships, and explored a deeper understanding of their personal power.”

One of the highlights of the day was from keynote speaker Dawnel De Rubeis, the 2017 Mrs. California US Universal. A resident of Santa Clarita and graduate of Canyon High School, Dawnel struggled through depression before seeking help. Now she is on the education committee for the American Foundation for Suicide Prevention and has been named a Community Advocate for the organization, giving her an opportunity to share her story with high school students.

“Dawnel’s talk had a great impact on these young women,” Davis said. “They could identify with her earlier struggles while now seeing how she lifted herself up and achieved something fantastic.”

The conference’s objectives were to increase self-awareness, learn about the “Queen Within,” and how to make choices of self-empowerment. Students attended workshops that included yoga/centering and balance, self-defense/personal empowerment, and vision board creation before the day ended with the “Coronation of Queens.”
Published April 25, 2017 Print