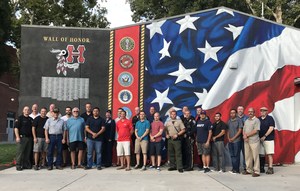 SANTA CLARITA, Calif – It took months of planning, a hot summer to complete and 134 names added to the Hart High School Wall of Honor, which recognizes the school’s graduates who have gone into military service
Over 700 people attended the ceremony, which featured a keynote speech from Major Breezy Long, a 2000 Hart graduate who went on to the Air Force Academy and has spent the last 13 years serving our country. Throughout her speech she recognized the many teachers she had at Hart who helped shape her into the success she is today.
As the names on the wall were revealed, a Los Angeles County Sheriff’s Department helicopter performed a flyby over the school to help commemorate the moment. Then all of the attendees whose names are on the wall were invited up for a photo.
As more and more names of graduates who served or are currently serving in the military become known to school administrators, their names will be added to the wall.
Published August 30, 2017 Print