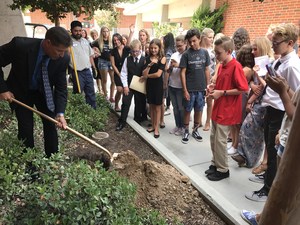 It all began in September, 1967, when Arroyo Seco Junior High School opened its doors to Saugus and Valencia students. On September 1, 2017, former students, teachers and administrators joined current students, teachers and administrators to celebrate the school’s golden anniversary.
In addition to speeches from current administrators and musical performances by the band and choir, past principals were recognized, including the school’s second principal Dr. James Bown, who took over in 1968. The school’s first ASB President, Dr. Samuel Dixon, III, gave the Pledge of Allegiance and also addressed the crowd.
Those in attendance first toured through the gym where class pictures from each of the previous five decades were displayed. For many, including Tim Williams who was in the first graduating class of 1968, simply being in the gym was a new experience.
“This didn’t even exist in the 60s,” he explained. “We had a little gym that is now the library.”
The library served as another destination as every yearbook from the past 50 years was out for attendees to peruse and reminisce.
The end of the ceremony was the burial of a time capsule that has, among other things, an iPhone, fidget spinner and teen fashion pictures entombed inside. It is scheduled to be opened in September, 2067, on the school’s 100th anniversary.
Published September 5, 2017 Print