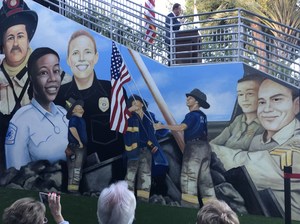 SANTA CLARITA, Calif – At a ribbon cutting on the same day we remember those who lost their lives on September 11, 2001, a wall honoring Saugus High School graduates who have gone on to serve as first responders was unveiled.
As a project initially proposed by Jacinda Molina and Madison Hollers for their Girl Scout Gold Awards, the First Responders wall is adjacent to the Wall of Honor in the school’s Courtyard of Courage. The ceremony, attended by several hundred people, featured music from the Saugus choir and band, as well as speeches from former Principal Bill Bolde and current Principal Vince Ferry.
Seventy names were revealed on the First Responders wall, with more to be added as more graduates serving in a capacity of law enforcement, firefighting or ambulance become known.
A single plaque was also unveiled upon the wall, that of Ventura County firefighter Ryan Osler, a 1997 Saugus High School graduate who sacrificed his life in Santa Barbara County on September 21, 2016, while fighting a brush fire there. Ryan’s wife, two children and mother were in attendance at Monday’s ceremony.
Work on the project took nearly a year, with Molina and Hollers organized the design, fundraising and creation of the wall. On November 11, 2016, the school revealed its first Wall of Honor dedicated to those graduates in the military.
Published September 12, 2017 Print