Dr. Mariane Doyle
Director of Human Resources and Equity Services
Compliance Officer and Title IX Coordinator
mdoyle@hartdistrict.org
Welcome to the Hart District Diversity Web Page!
This page has been established to provide community members with information about events and activities that promote a "culture of respect" among all students and staff in the Hart District. We hope that you will visit often to learn more about our efforts to foster diversity awareness and appreciation in our school community.
Diversity Efforts Recognized
The Association of California School Administrators (Region XV) has awarded the Hart District its "Valuing Diversity" award for 2012. In 2008, the District received statewide recognition from the California School Boards Association, earning the coveted Golden Bell Award for School Safety Programs. Currently, more than 2,000 students are directly involved in diversity program leadership roles in Hart District schools.

Featured Program - Safe School Ambassadors
This year, more than 669 students across 12 campuses were trained to work within their peer groups to reduce intergroup tensions, increase social inclusion and promote a general atmosphere of respect for all students. More than 1,443 Safe School Ambassadors are currently attending Hart District schools. This year, West Ranch HS trained its first Safe School Ambassadors, so that now the District can finally report that every comprehensive has an SSA. In addition, Sequoia School also runs a modified version of the SSA program. 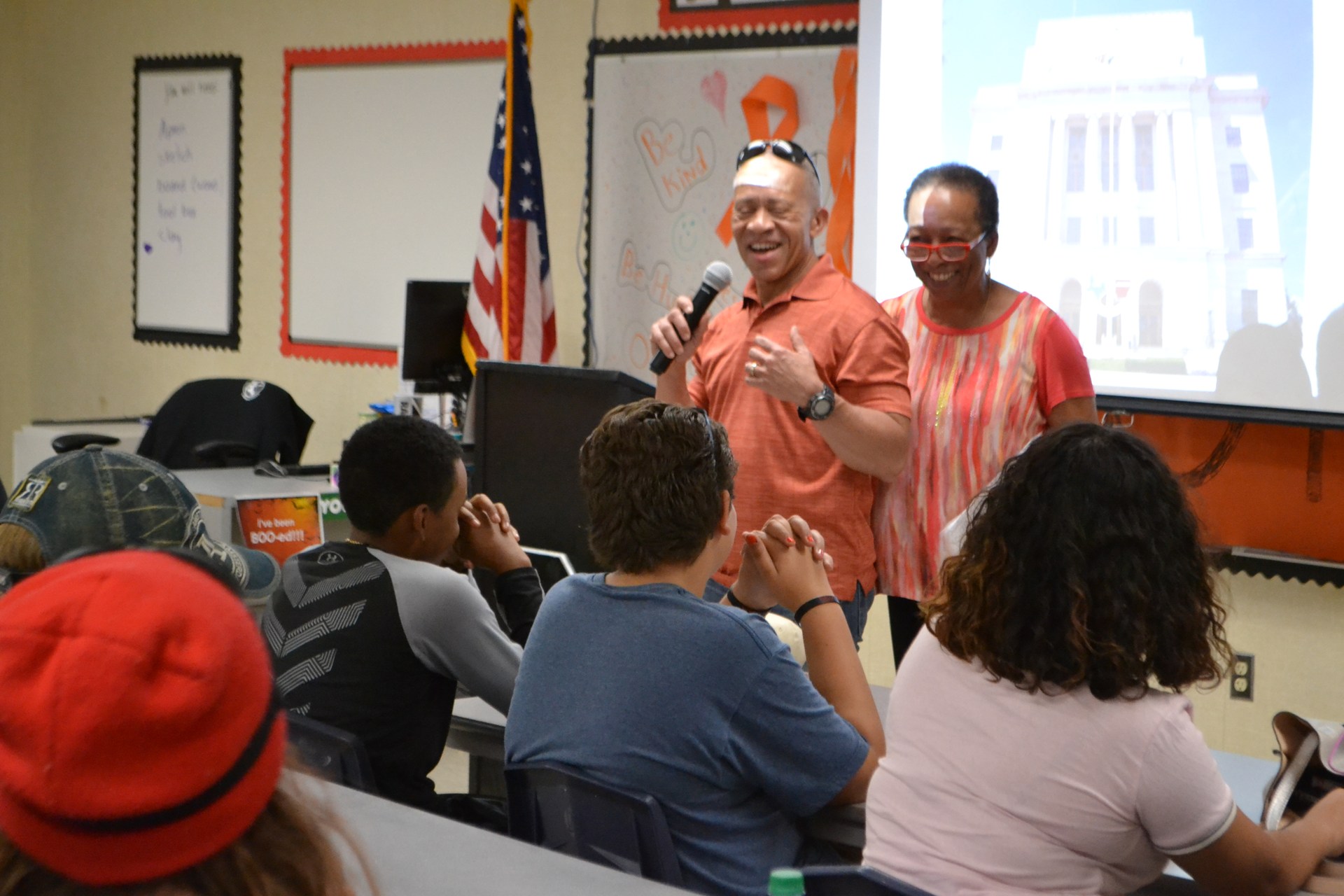 The annual Unity Day was once again observed at Sequoia with special guest speakers telling how they had to overcome obstacles in their life to get to where they are today. The husband and wife team of Patricia and Bobby Burns, Jr (trumpet player with Earth, Wind & Fire) spoke on the civil rights movement, segregation and coming together as a community to support diversity.
Golden Valley Students Learn of DACA First Hand 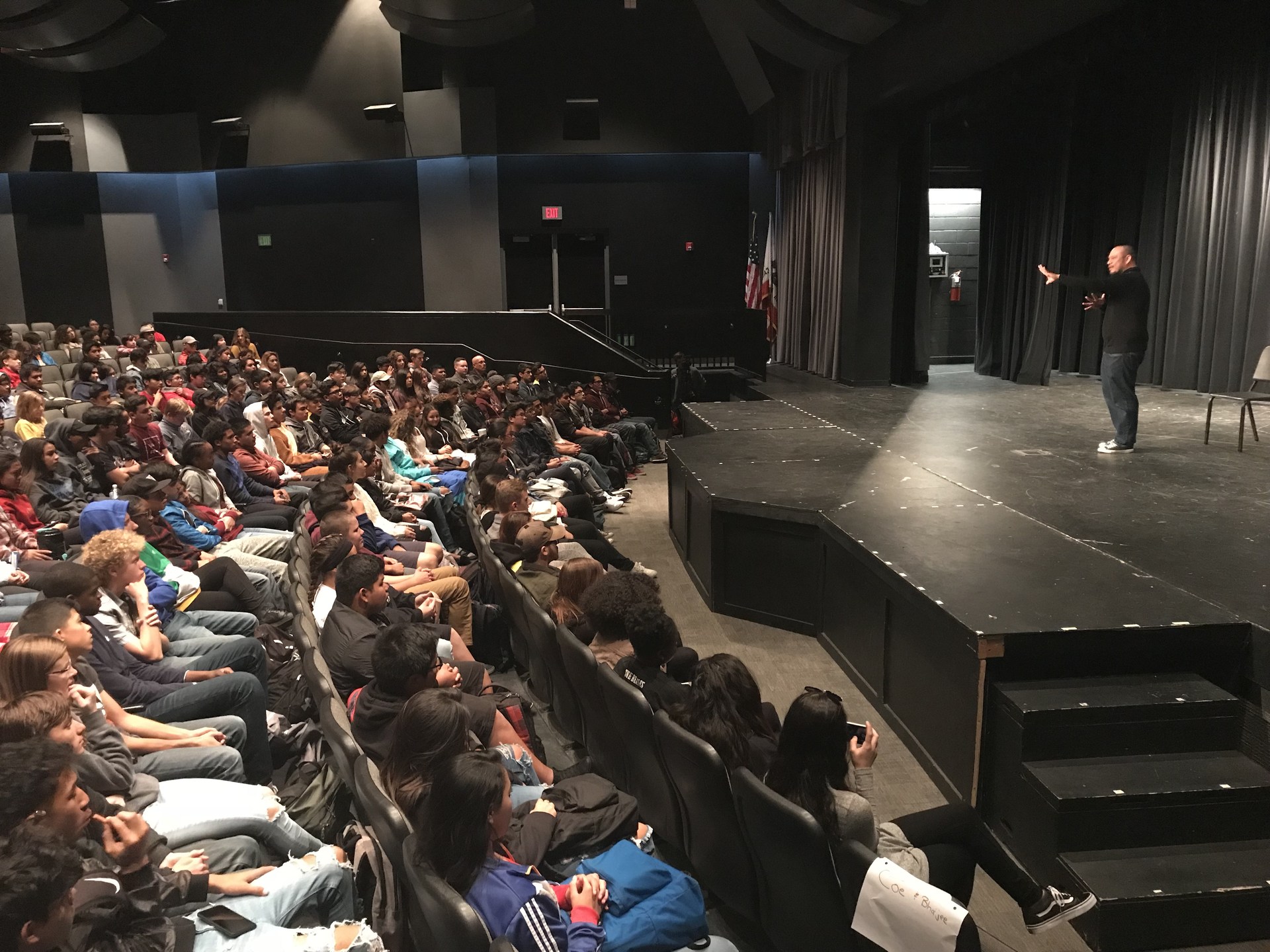 Students filled the theater at Golden Valley to hear Alex Alpharaoh’s one-man show entitled “WET: A DACAmented Journey.” The performance told Alex’s personal story of how the Deferred Action for Childhood Arrivals (DACA) positively impacted his life. The presentation was organized by members of the school's Student Task Force, which is an outreach effort of Human Rights Watch.

High School Students Stage Fair at Placerita Junior High
Ninth grade students from Academy of the Canyons Middle College High School created “Students Against Labels Faire” at Placerita Junior High School Friday to show the younger students how people around the world face discrimination and intolerance.
The fair was born out of a reading assignment of “To Kill a Mockingbird” by Harper Lee by the AOC students. Booths were set up in the Placerita gym presenting information on specific types of discrimination, efforts to overcome it that included community-based approaches, and suggestions for how students can lessen the intolerance faced by members of these discriminated groups.

The junior high students had an opportunity to visit 15 different booths set up by their older counterparts, with the hope that students would learn to understand some of the experiences of misunderstood individuals. The booths included:
AOC Students Receive Class Being Tested by Museum of Tolerance

Recently, students at Academy of the Canyons participated in classes taught by educators from the Museum of Tolerance. The class focused on social media today, and how it is being exploited by individuals and organizations promoting hate speech and activity. Students gave useful feedback on the effectiveness of the teacher's presentation. The class is in its developmental stages, as the Museum prepares a curriculum for delivery in schools nationwide. The AOC classes were selected because of previous study already done by these students on topics such as race relations, and diversity awareness. The students visited the Museum of Tolerance a couple of days after participating in the class.