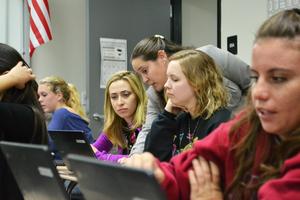 SANTA CLARITA, Calif – According to news stories published across the State of California, hundreds of thousands of students are without any device that is required for Distance Learning as a result of Coronavirus campus closures. School districts are just not able to provide a device to help these students.
Not so in the William S. Hart Union High School District, which serves 22,000 students from grades 7-12 in Santa Clarita. Since the shutdown, the District has been able to distribute nearly 4,000 Chromebooks to students.
Since 2014, the Hart School District has been slowly working toward a 1:1 ratio of computers to students. These devices have been available for teachers to bring into their classroom to help with lessons, with the objective being if every teacher in every school needed a device at the same time they could get them. Every three years these Chromebooks were rotated with newer devices, which subsequently led to a surplus.
In 2018, with the help of the District's foundation (WiSH Education Foundation), these surplus Chromebooks were made available for free to any student who had a need for a device to work on at home. Nearly 1,500 were distributed at that time.
However, with the Coronavirus outbreak and subsequent closing of campuses, the number of Chromebooks distributed to families in Santa Clarita has jumped. In the first few days of distance learning, over 3,000 devices were distributed, with a total to date of nearly 4,000. Most importantly, every student who has asked for a Chromebook has received one.
“The WiSH Chromebook program was never intended to be used for emergency response, but of course it became absolutely vital when school closures were announced,” said Amy Damiels, WiSH executive director. “School site administration quickly identified need and the District Technology Department's response time with deliveries was remarkable.”
“It is with great pride in our administrative team, our teachers and our WiSH Education Foundation that they have accomplished what most other districts in the U.S.A. were unable to do as Distance Learning was implemented,” said Hart District Governing Board member Steve Sturgeon.
Published April 29, 2020 Print