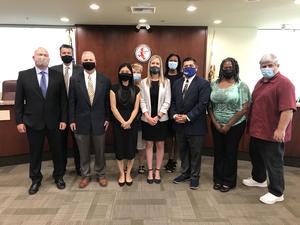 SANTA CLARITA, Calif – The William S. Hart Union High School District Governing Board unanimously approved six new assistant principals at Thursday’s special meeting.
The six new administrators – Shonna August, Ashley Gore, Richard Haring, Eunice Hong, Timothy Hopper and Jorge Maldonado – have not been assigned a school site within the District.
“As our Board President emphasized this morning, we are looking for leaders with a growth mindset - an orientation toward continuous improvement,” said District Superintendent Mike Kuhlman. “We have high standards in the Hart District and we all feel optimistic about the strength of this group of new administrators.”
Shonna August
Ms. August began her career in Education in 2000 as IMPACT Coordinator at Sepulveda Middle School in the Los Angeles Unified School District. She came to the Hart District as a Biology and Chemistry teacher working at Arroyo Seco Junior High, Placerita Junior High and most recently Bowman High School. Ms. August has also been ASB Director and Summer School Administrative Intern. She holds a Bachelor’s Degree in Biology from Cal State University Northridge and a Master’s Degree in Educational Administration also from CSUN.
Richard Haring
Mr. Haring began teaching at West Ranch High School in 2004 and since then he has taught Molecular Genetics and Microbiology among other courses in the science department there. Rich has also been Head Boys Soccer Coach, Intervention Teacher, Summer School and Site Admin Intern, WASC Group Leader, AVID Coordinator, Science Department Chair, Professional Development Coach as well as site Teacher of the Year. Mr. Haring has a Bachelor’s Degree in Biology from UC Santa Barbara, a Master’s Degree in Curriculum and Design from Cal State Northridge and a Master’s Degree in Educational Administration from CSUN.
Timothy Hopper
Mr. Hopper comes to the Hart District from Coronado High School in the Coronado Unified School District where he has been an Assistant Principal since 2017. Tim also served as Assistant Principal at San Gabriel High School prior to Coronado High. In his roles as Assistant Principal, Tim has provided leadership in all aspects of a comprehensive high school setting including Restorative Practices and Multi-tiered Systems of Support including the Medical Emotional Discussion Team and other community-based supports for students. Prior to this administrative work, Tim was an English Teacher, Activities Director and Coach in the Rialto and Alhambra Unified School Districts. Mr. Hopper has a Bachelor’s Degree in English from Azusa Pacific University and a Masters Degree in Educational Administration from Brandman University.

Eunice Hong
Ms. Hong began her career as an English teacher at Golden Valley High School from 2007 to 2015 where she taught grades 9-11, ELD and AP Language Composition. She was also advisor for the Key Club. Eunice then became the English TOSA for the District until last year when she returned to the classroom as an English Teacher at Academy Of the Canyons. Ms. Hong has developed and facilitated numerous District Professional Development Workshops and she has also been Summer School Admin Intern. Ms. Hong received Bachelor’s Degree in English from UC Irvine, a Master’s Degree in English from UC Irvine and a Master’s Degree in Educational Administration from Cal State University Northridge.
Jorge Maldonado
Mr. Maldonado was a Math teacher in the Los Angeles Unified School District from 1996 to 2016. In that time, he taught mathematics in both English and Spanish at Hollywood High School as well as working as a Math Coach, Track Coordinator, Soccer and Football Coach, and Dean of Students. Since 2016 Jorge has been an administrator in the Palmdale School District working as Assistant Principal, MSAP (Magnet Schools Assistance Program) Grant Coordinator, and Medical/Health and Technology Magnet Academy Principal. In his administrative roles he has developed and implemented large budgets to support the teaching learning process through Professional Development and data analysis. Mr. Maldonado has a Bachelor’s Degree in Business Operations from DeVry University and Master’s Degree in Educational Administration from National University and he also was a member of the US Army Reserve.

Ashley Winkler
Ms. Winkler has been a Science Teacher at Saugus High School since 2012 where she has taught Biology, Forensic Science, Anatomy/Physiology, and Earth Science as well as coordinated science labs and meetings at Hart @ Home. Ashley has also been a PD team member, Club Advisor for Common-Cents, DFY SCV, and Safe School Ambassadors as well as a Mentor Teacher and Summer School Admin Intern. Ms. Winkler has a Bachelor’s Degree in Biology from Cal State University Northridge, and Master’s Degree in Curriculum and Instruction from CSUN and a Master’s Degree in Educational Leadership from Western Governors University.
The District received over 100 applications for these six positions. The new administrators will begin on July 1, 2021.
Published June 22, 2021 Print